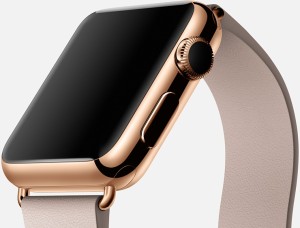 Considering the near certainty that the Apple Watch’s base model won’t contribute much to Apple’s bottom line, there has to be another way to justify a potential trillion dollar or over trillion-dollar market valuation for Apple (NASDAQ:AAPL). While a lot of digital ink has been spilled on the prospects of an Apple disruption and reinvention of the automotive industry, that is still several years away. Even assuming that Apple is serious about that project and that project pans out, it will still take a few quarters for all the dust to settle and see whatever positive impact that initiative would have on Apple’s bottom line. There’s just so much speculation on the table.

However, it is clear that a number of market analysts is seeing that Apple is not just taking stabs in the dark with the Apple Watch. It’s too easy to dismiss the Apple Watch project as Apple’s branded approach to wearable wireless technology. It’s easy to dispel it as some sort of “me too” initiative. However, one asset that Apple knows that it has at its disposal is its solid brand. It has a huge army of faithful consumers who are just in love with the Apple brand. It seems like with this group of brand fans, Apple can do no wrong.

This is why the whole theory of Apple moving into the luxury market makes a lot of sense. You have to understand that a certain level, Apple has always been a luxury brand. Think back to its Mac computer experience. Why would somebody buy a Mac computer while there are many other desktop boxes that run on Intel chips and Microsoft Windows that cost several hundred dollars less? Currently, why would somebody spend upwards of $400 on an iPhone when they can get a smartphone with the same capabilities for much cheaper if that phone runs on Android?

Apple knows the value of its brand. Apple knows that people are willing to pay several hundred extra dollars just for the privilege of walking around with that Apple logo on the back. According to this line of analysis, the Apple watch is really all about an embrace of the luxury aspect of Apple technology.

This theory might have some legs but the concern that keeps me from fully signing on to this theory is the fact that these are tech gadgets we’re talking about. It’s not like a handcrafted watch that you can pass on as an heirloom to several generations down. Moreover, technology tends to degrade rapidly thanks to Moore’s Law. While the luxury brand theory does have a lot of good points going for it, I’m not fully convinced.

Mr. Eugenio graduated with honors from the University of California at Berkeley with a degree in History. He has written extensively on financial markets ranging from gold IRA issues to commodities to tech stocks and all points in between. A veteran of the first Dot Com boom, Gene has headed venture- and angel-funded technology and media startup companies so he definitely has more than his fair share of market, technology, and finance expertise. Ever since moving to Asia, Gene has focused on assisting Internet businesses with compelling original content as well as outsourced social media outreach. You can reach him at contact AT geneeugenio.com