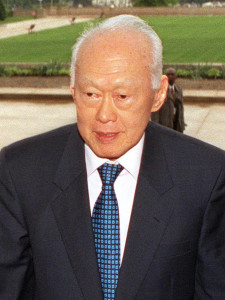 Lee Kuan Yew has died. The former prime minister was 91 years old, and a state funeral is expected on March 29th. Yew was Singapore’s prime minister for 31 years and helped turn the country into a wealthy hub during his tenure.

Yew was also blamed for having too much power and restricting freedom of speech.

Lee Kuan Yew was in the hospital for several weeks, and reports state that he was on life support. News of his death has received an outpouring of condolences from US president Barack Obama and UN Secretary General, Ban Ki-moon, among others.

Singaporeans have went to pay their respects for the prime minister that many older generations view as a father figure. Flowers can be seen lined up outside of the hospital where Yew passed.

Questions of what will happen to Singapore now that Lee has died are rising. The country has been within his power ever since the country separated from Malaysia in 1965 and was a co-founder of the People’s Action Party, which has governed the country since 1959.

Lee was prime minister from 1959 through 1990. He also held many minister roles in the country from senior minister to minister mentor until 2011.