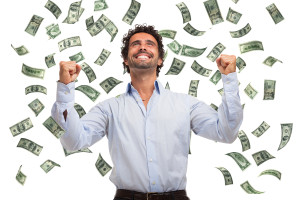 A man has made $250,000 dollars in just one night. It was a great night, according to his publicist who was hired just before the stroke of midnight of the eve of this report. The man, who wishes to remain anonymous, began his streak of good luck by signing up on a cool landing page.

As the reports claim, he read on and on about how this get-rich quick plan would work overnight. It came with about 10 books or so, really lengthy material. Snapshots revealed publications such as “How to Get Money to Rain Down without Sneezing” and “1,000 Ways for Dollar Bills to Multiply.”

The testimonials were simply too colorful to deny, so he ordered the program. Being an excellent speed reader the pages were easy to absorb.

The 250 G’s got the man so excited he began to write a jingle about squeeze pages. He was certain it would make him another quarter of a million by noon.

Just one step further, however, and his foot was firmly plastered in cat poo. To top it off, his striped pajamas caught on his big toe, causing him to fall out of bed as broke as when he went to sleep. It was just a dream.