One person is dead and several were injured following a fire on Petroleos Mexicanos’ (Pemex) Abkatun Permanente platform in the Bay of Campeche, offshore Mexico.

The blaze took place in the dehydration and pump area of the platform, located off the coast of eastern Campeche state, Pemex said in a statement. Production at the oil fields began in 1980.

Pemex has suffered a number of accidents in recent years, with at least 37 people killed by a blast at the company’s Mexico City headquarters in 2013.

Mexican state-run oil company Pemex said on Wednesday it had evacuated around 300 workers after a fire broke out on an oil platform in the Gulf of Mexico, with local emergency services reporting that at least 45 people were injured.In response to the explosion and ongoing fire on the Pemex oil rig in the Gulf of Mexico, Charlie Kronick, Oil analyst for Greenpeace UK, said in a statement, “Greenpeace offers its condolences to the friends and family of those killed and injured as result of the explosion on the Pemex oil rig Abkatun Alphan in Campeche Sound. This tragic accident, which comes just days before the fifth anniversary of the Deepwater Horizon oil spill, once again demonstrates the true cost of our addiction to oil, whether in the Gulf of Mexico, Nigeria or the Arctic. The sooner we end our dependence on dirty and dangerous fuels like oil and shift to clean energy, the better.” 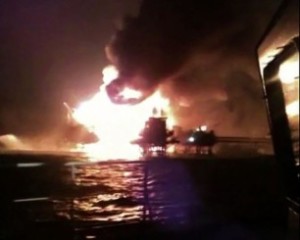